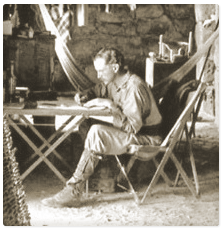 The Fenby or ‘Tripolina’ chair was designed in 1855 by Joseph Beverly Fenby, a British engineer and inventor, and was patented in 1877 in England. The J. B. Fenby Co. first manufactured the design, but did not last long and was bankrupt by late 1879. Apparently, Fenby was a better inventor than businessman.

His masterful design, however, succeeded. Presented by Fenby at the International Exhibition of Saint-Louis, Missouri, in 1904, the design was licensed to French and Italian manufacturers and to Gold Medal Inc. in Wisconsin, USA, a company that produced military, camping and resort furniture in the early 20th century. It was sold at retail by famed outfitting company Abercrombie and Fitch of New York.

The Fenby Chair became widely known in Europe as an officer’s chair or “Campaign Chair” but also as a safari or beach chair. Used by the U.S and British armies, the Fenby Chair was also used by the Italian army in the 30’s during its campaigns in Lybia where the chair became known as the “Tripolina Chair”. 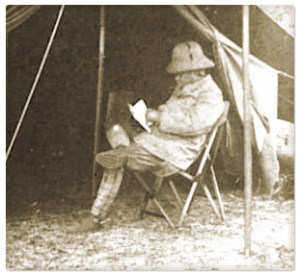 Notable users of these chairs include Theodore Roosevelt, Thomas A. Edison and renowned wildlife biologist Aldo Leopold, and many officers, safari hunters, explorers, and adventurers worldwide.

The original Fenby chair frames were made of wood and metal with a canvas or leather seat sling. They folded quickly and stored compactly. In addition to its light weight, comfort and portability it was an elegant solution in terms of design and was regarded as an example of design excellence. On July 24, 1940, the chair was shown at the 3rd Salon de Artistas Decoradores exhibition in Paris where it was discovered by the Museum of Modern Art. At the request of MoMA design director Edgar Kaufmann Jr., three pre-production chairs to New York. One is in the MoMA collection and one is at the Frank Lloyd Wright house Fallingwater, but no one knows where the third chair went.